It’s a shame that such delightfully biting mockery is trampled to death by compulsive repetition.

The genesis of “Let’s Go Brandon” is truly a legendary turn of circumstance. The nuanced layers of irony piling atop each other so snugly is a rare sight to behold.

It was just a stupid car race, really. Not political at all, insofar as the typical Southern NASCAR crowd is not political, which I don’t reckon is a safe a bet for anyone Left of Majorie Taylor Greene.

The race took place at Talladega in Alabama and when it was done, Brandon Brown emerged as the winner. A post-race interview catapulted the young man into the timeless annals of political mockery and vicious meme-ology.

Kelli Stavast, an NBC Sports reporter, was interviewing an emotional Brown in the winner’s circle. While these interviews are normally standard fare, the crowd made things a little more complicated: Chants of “Fuck Joe Biden” poured down from the stands.

In an apparent attempt at a lighthearted segue, Stavast referenced a much less audible chant than the Biden one: “Let’s go, Brandon.”

These are the essential building blocks of a magnificent narrative. You’ve got your un-ironic ass-covering from a mainstream news source (and ESPN is viciously mainstream news of the sports type) which is shrouded in very embarrassing layers of revealing “you didn’t see that” buffoonery. Not only that, but the miasma of this journalistic vulnerability provided a timeless template for a synonymous epithet which we are free to say openly in its disguised form with a connotation which is well-known and in open sourced communal knowledge. I say Brandon, you hear Brandon, and we know it means “fuck Biden.” Much more subtle and satisfying than the stupid Trump Derangement movement that could only summon “Fuck Trump” as a desperate means of unsophisticated ridicule.

Over the course of early October, Twitter users began using the phrase “let’s go Brandon” in place of “fuck Joe Biden” in order to criticize the President, as well as the hashtag “#LetsGoBrandon.’ On October 3rd, Donald Trump Jr. posted, “Great to see real America representing loud and proud. ‘Let’s go, Brandon!'” along with photos of people holding a “fuck Joe Biden” flag, gaining over 51,000 likes and 8,400 retweets (shown below). On October 4th, Brown tweeted, “Let’s go Brandon,” adding in a comment, “not political… just feelin myself,” gaining over 15,300 likes and 2,000 retweets in two days.

Unfortunately, the strength of “Let’s Go Brandon” is also its weakness.

It rapidly spread like wildfire. It has been re-ignited countless times by politicians, celebrities, and even the source himself.

The tidal wave-like onslaught has been resounding, even deafening. The viral spread is epic, on a scale of that other viral spread we’ve endured for the last 2 years.

The problem is that everyone is piling aboard the Brandon train and we are rapidly approaching a tipping point where the saturation begins to consume the meme’s wicked cleverness, and it becomes a victim of its own success. Peak Brandon, so to speak.

Memes, by nature, are esoterically rare and reveal their insight through restraint and subtlety. Now that every Tom, Dick and Harry feels the compunction to join the Brandon fray, it’s losing its luster. 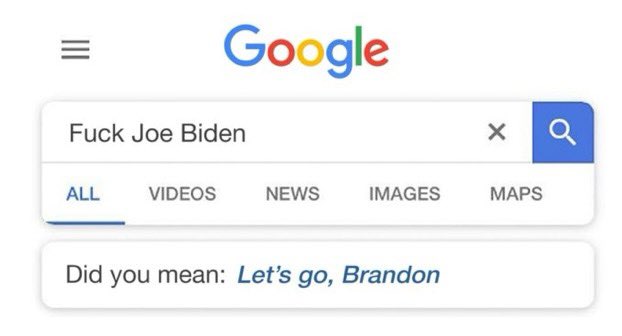 Funny? Hell yes, and the infinitude of angles and contexts is dazzling. But uniqueness is becoming rarer. The saturation has diluted enjoyment. If a meme is a victim of its own success, how do we prevent saturation? Maybe we don’t and it just fizzles on its own while simultaneously becoming a permanent cultural trope we can leech off for years to come.

Kelli Stavast’s motivation for her weak deflection in scapegoating the “Let’s Go Brandon” chant in plain defiance of what we all know the predominant chant was is the function of a dutiful employee keeping ESPN in the clear by burying the word “fuck” from the censors rather than a sneaky ploy to protect the image of President Biden. The Right largely cites this as an example of the mainstream media’s opportunistic Leftism but I’m not buying. At the precise moment during the live interview, Stavast only heard the word “fuck” and feared for ESPN’s standing; I doubt “Fuck Biden” triggered her to rush a bandage over his faltering reputation by pushing the alternate chant into the conversation.

It was all about ESPN’s rep and muting the bad word the crowd was chanting loudly on the air, not about the Biden part of it.

No on gives a Brandon about Biden.