Is the Left’s revisionism finally being starved out?

She: (with contempt) How could you vote for him? He’s way out there!
He: (defensively) He’s not. There’s nothing crazy about him.

Larry Elder is not a Trumpian whack job.

My wife bought mainstream culture’s narrative, something too many have thoughtlessly assembled into their political mindset.

We don’t normally step back and try to dissuade ourselves from an easy and convenient mental suggestion, and nothing is easier or more convenient that mainstream culture’s high school hallway condemnations and sneering judgements.

Elder had no chance of winning in this state and anybody who thought so was, 1) delusional, or, 2) perpetuating a psychological agenda that was intended to demoralize and humiliate the Hard Right which had no business entertaining a successful Newsom recall in this state which is a wasteland of Leftist tools who have collectively embarked on a revisionist campaign.

By “revisionist,” I am referring to the systemic concerted practice by the Left and its enablers to spin the Hard Right as alienated nuts, losers and charlatans unworthy of consideration. When enough of the student body is convinced, it is impossible to break free of the social tsunami and any self-defense mounted is doomed to echo the presumed insanity. As in, “Larry Elder is not out there!”

“Revisionist” as in systemic concerted practice to spin events and frames as a symptomology and manifestation of the behavior of those ostracized to alienated nuttery, loserdom and charlatanism. “January 6 was the bleakest day in American history because hundreds of people almost overthrew the United States!”

The Left, with the complicit help of the mainstream media and mainstream culture, plant the genesis of insanity and oddity on the Hard Right, an idea and suggestion which coalesces in the modern ignorant mind that is trained to treat everything preached from the pulpit of mainstream culture as gospel. This frame is shared and amplified across the field of social interaction.

I suspect much of this revisionism is less subtle. It’s more overt but less traceable and more plausibly denied.

Like publicly expecting 10,000 people to attend a rural Kentucky rally headlined by snake oil pillow salesman, Mike Lindell, and the ensuing “bombshell” coverage of a measly 300 people showing up. The media rants.

The “We the People Reunion,” a conservative rally, began in Muhlenberg County on Friday.

The event is hosting speakers such as the CEO of MyPillow, Mike Lindell, former national security advisor Michael Flynn and Pastor Greg Locke, who has in the past admitted to being at the Capitol during the January 6 Capitol riot.

The rally began at the Muhlenberg County Agriculture and Convention Center.

Promoters said they expected crowds of around 10,000 people.

Those sneaky “promoters.”   Curious bunch.  They are fond of predicting thousands of people will show up at these conservative events and the media chirps in appropriate shade at the couple hundred stragglers who do.

Fewer than 300 were at the event when 14 News arrived.

In the interest of fairness, not a strong suit of most media, it would be nice if they stated what time they “arrived” at the event.  As if troubled by the ambiguity of their insinuation, they clarify when arrived as the marker.

14 News did speak with a group of women who fear that such a large event is dangerous during a pandemic.

“People are getting sick and they’re dying,” Powderly resident Rhonda Wood said. “Friends of ours, people we know, and we haven’t been able to stop it. We’ve tried, we’ve pleaded, we’ve sent requests – done whatever we could.”

Where was this group of women? In the 14 News parking lot? At Walmart?  This is another conspicuous glimpse into the resounding good sense of the anti-Trump vaccinatariat. What is Trump’s role in any of this and where is he?  Only his satellites showed up. 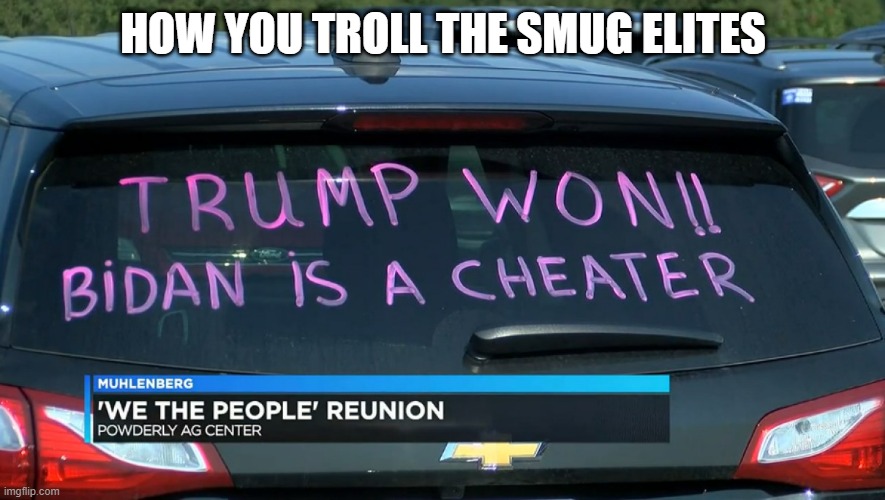 I think Trump and much of the Hard Right is finally getting a clue about the Left’s PR engineering shenanigans.

The MSM scornfully plasters a headline:

Trump thinks the Sept. 18 rally in support of Capitol riot suspects is a setup designed to make him look bad, report says

As if these are the deranged rantings of a raving lunatic, which is the revisionism I spoke of.   There is nothing unreasonably paranoid about Trump’s suspicions.

Former President Donald Trump is staying away from the September 18 Washington, DC, rally in support of Capitol riot suspects because he thinks its a set-up to damage his reputation, sources told The New York Times.

Trump has in the past spoken in support of his fans who attacked the US Capitol on January 6 in a bid to stop Joe Biden’s certification as president.

But sources told The Times that he won’t be going anywhere near Washington on Saturday, and will instead spend the day at his golf resort in Bedminster, New Jersey.

“Mr. Trump views the planned protest as a setup that the news media will use against him regardless of the outcome,” the Times reported, citing people familiar with his thinking.

It’s about time they wake up.

The Saturday rally was organized by Matt Braynard, a former Trump campaign data official, and is being held in support of those who have been jailed or have faced other punishments in relation to the Capitol riot.

Earlier this week Braynard said attendees would not be allowed to wear clothing in support of Trump or Biden, saying the event was “not [about] the election or any candidate.”

Trump is not the only Republican keeping his distance, with Reps. Marjorie Taylor Greene and Madison Cawthorn, who were originally scheduled to speak at the event, both canceling their appearances, Politico reported.

Finally the Hard Right is resisting the lure.  Better late…

As I wrote here on Tuesday:

Hasn’t the Hard Right put two and two together by now? They keep succumbing to the humiliation bait and the worst thing is, they can’t even be dignified about it.

The Hard Right’s predicament is ultimately its own doing. They relentlessly chase the low-hanging fruit of conspiratorial diversion and succumb to fanatical hyperbole. Because of their gullibility, they imprint their suspicions on all crackpot saviors and unlikely plots.

Donald Trump is too smart for shtick and it’s time for him to smack the sheep upside the head (and maybe banish Mike Lindell to the permanent pillow zone). The Left’s revisionism is only as destructive as the Hard Right allows.  And for the past year, they have submissively surrendered any common sensed lucidity to the manipulations of a devious Left.